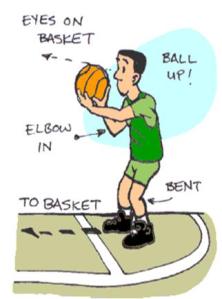 Five seconds to go, the ball is in Joe’s hands, his team is down by one, and he sees a clear lane to the basket. He dribbles the ball and drives to the hoop. As he flies through the air and the ball leaves his hand, the buzzer sounds to end the game. The ball hits off the rim, and falls to the ground, it’s no good. But wait! The referee blows his whistle; Joe was fouled on the shot. He will go to the free throw line for two free throw attempts.

The game is on the line and is solely on Joe’s shoulders. He has two free throw attempts and a chance to win the game. If Joes fails to make either of these attempts his team will lose the game. If he makes one shot, the teams will be tied and the game will be sent into overtime. However, if he makes both attempts, his team will be victorious and he will be the team hero.

Of course with all of this pressure, Joe is extremely nervous and doesn’t want to let his team down, so he thinks back of what his coach taught him about shooting a free throw. First, relax before stepping to the line. Joe walks around for a few seconds and gets mentally prepared for the shot. He takes a few deep breaths and steps to the free throw line. Once at the line, he tries to block out everything around him, the players, the fans, everything but the basket. The less distractions, the easier it is to concentrate (How to Consistently Shoot a Free Throw 1).

The referee hands Joe the ball. Now Joe thinks back on what his coach taught him about making a free throw. First he sets his feet about shoulder width apart. Next, he points his feet toward the basket, and places his right foot just behind the free throw line, and directly in the center of the line, straight across from the basket. Joe remembers to keep his feet still, and try to stay as balanced as possible (How to Consistently Shoot a Free Throw 1).

Second, Joe does his free throw routine. He likes to dribble the ball three times and then prepare to shoot. This gives him a feel for the ball before he attempts the shot. Joe does this before every free throw because it makes him feel comfortable at the line, and also has made him a more consistent shooter. His coach said that a routine is one of the most important things about a free throw because if you practice free throws with the same routine every time, you’ll be much more consistent, and shooting the free throw with the game on the line will be no different than if you were in your backyard practicing (How to Consistently Shoot a Free Throw 1).

Now Joe goes through the mechanics on how to shoot the free throw. First, Joe places his right hand, or shooting hand, on top of the ball and left hand on the side of the ball. He will use his right hand to shoot and guide the ball to the basket, and his left hand only as a placeholder for the ball. In order to get a softer touch, Joe holds the ball with his fingertips, not his palm (Learn2Shoot a Basketball Free Throw 1). Second, Joe holds the ball about chest high, puts his right wrist in a cocked position, and brings his right elbow in towards his body. Joe puts his elbow in and keeps it as straight as possible to put the ball on a straight path to the basket and to provide a more accurate shot. Joe is now set, and ready to shoot the ball. He looks at the basket and remembers how his coach always told him to aim for the back of the rim. The reason for this is because the ball has a far greater chance of going in if it bounces off the back of the rim, than if it hits the front of the rim (Learn2Shoot a Basketball Free Throw 2).

Just before Joe shoots the ball he bends his knees, as if prepared to jump. He then extends his legs in an upward motion, without becoming airborne, and simultaneously brings the ball up from his chest and releases the ball at the highest point of extension (Learn2Shoot a Basketball Free Throw 3). To project the ball, Joe snaps his right wrist, and holds his hand in the air with his fingers aimed towards the basket in order to guide the ball to the hoop. This snapping motion is called a “follow through” and is one of the most important parts of a shot (Learn2Shoot a Free Throw 4). The ball is up in the air, as the crowd and teams wait in anticipation. Swish, the ball cleanly falls through the basket without touching the rim, nothing but net, a perfect shot! The crowd goes wild as Joe has just tied the game. Joe stays calm because he knows he has not won the game just yet. The referee hands Joe the ball for the second attempt. Joe repeats what he did on his first shot, relaxes, performs his routine, sets his body, aims, bends his knees, shoots, and follows through. He executes the free throw perfectly, and swish, another flawless shot. Joe wins the game! Joe’s team rushes at him and they all go crazy in celebration. Joe is the team hero.