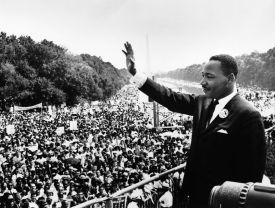 Dr. Martin Luther King Jr.’s “I Have a Dream” speech is one of the most memorable events in the history of the United States of America. Public speakers, activists, and academics alike all marvel at his unmistakable stage presence, passion, and incredible charisma. However, also worth some further study are Martin Luther King Jr.’s vocabulary, content, and rhetoric utilized during his unforgettable oration. Analyzing a textual transcription document of his speech can provide some interesting insights.

First of all, analyzing a speech versus a transcription has two completely different feels. A speech allows you to evaluate some important aspects, such as body language, voice inflection, stage presence, and audience interaction, to name a few. While studying a transcript tends to ignore those factors, and allows you to really focus on the words that were used.  Unfortunately, seeing the speech prior to analyzing the transcription can prove to be problematic, as in this case, I could hear Martin Luther King Jr.’s voice of conviction in my head as I read “I have a dream today!” Additionally, when exploring a speech, it’s important to understand the context. Who is the speaker and why did they hold the speech? In this case, Martin Luther King was the face of the civil rights movement, serving as a leader to key organizations in the black community, such as National Association for the Advancement of Colored People and Southern Christian Leadership Conference. Deriving his ideals from Christianity and his operational techniques from Gandhi, King traveled over six million miles and spoke over twenty-five hundred times between 1957 and 1968, appearing wherever there was injustice, protest, and action. He also wrote five books and numerous articles to spread his message of racial justice.[1] The context of the “I Have a Dream” speech was a peaceful march on Washington D.C., comprised of 250,000 people, in which King exclaimed the event “will go down in history as the greatest demonstration for freedom in the history of our nation.” This type of setting most certainly had an impact on King’s approach and the type of words he used. King knew he would have to use words that the audience could relate to in order to have such a large crowd motivated and inspired. This is clear, as he speaks of the shared history and future goals that apply to each and every American. Furthermore, realizing that such a large scale event would garner national attention from the masses and the nation’s leaders, King often cited core American ideals in his speech. Using words from the Constitution, Declaration of Independence, and Emancipation Proclamation, King taps into the values that so many Americans express great pride for and most surely would not ignore.

To fully appreciate and understand the meaning behind this speech, there are several background events that important to be aware of. African American history, including the history of slavery and abolishment of slavery, Jim Crow laws, and various other black/white relations are all key in understanding King’s message. With regards to the history of the African American community, another critical piece of King’s speech to look into is the various references he makes to injustice in America. King cites things like police brutality, poor economic mobility, and acts of discrimination to emphasize the state of racial inequality in America. Being such a prominent, well respected figure in the civil rights movement, most observers of King surely take his word for fact. However, when analyzing speech or textual documents, it is important to be able to reference other sources to ensure the accuracy and validity of the statements being made. In the present day, various sources are available that highlight the history of blacks in America, along with the tribulations they have endured. In the time of King, engaging the black community would have been a great way to test the validity of some of his statements.

Throughout history, many of the world’s revolutions and social movements have been lead by the oppressed violently overthrowing their oppressors. One key concept present in King’s speech is the use of peaceful, non-violent rhetoric. His emphasis for non-violence is evident in his words:

“In the process of gaining our rightful place, we must not be guilty of wrongful deeds….we must forever conduct our struggle on the high plane of dignity and discipline. We must not allow our creative protest to degenerate into physical violence. Again and again, we must rise to the majestic heights of meeting physical force with soul force.”

Furthermore, King stresses that rather than overtaking the power from their oppressors, the black community should aim to establish equality among the white community, stating:

“One day right there in Alabama, little black boys and black girls will be able to join hands with little white boys and white girls as sisters and brothers.”

Within his rhetoric, King also does an excellent job of appealing to the entire nation. He draws attention to each region of America, ensuring that those he is speaking to understand that the plight for justice is a collective effort. His use of song-like verses at the end of his speech is also very effective at making his words memorable.

Author Tim May makes an interesting point regarding documents, stating “Documents may…be interesting for what they leave out, as well as what they contain.”[2] When studying King’s speech using this insight, a few questions arise, such as:

Finally, when analyzing a document or speech, it can be useful in understanding the meaning by pulling out the key concepts that were discussed to understand how the person delivering the message organized the information presented. In King’s case, the speech seemed to follow the following organizational structure:

In summary, Martin Luther King Jr. had some amazing moments in the public sphere; none more memorable than his peaceful march on Washington D.C. Watching his speech is truly remarkable, as his words inspired the hearts of a nation.  By completing a textual analysis, one is able to draw even more insightful knowledge about this epic moment in America’s history.